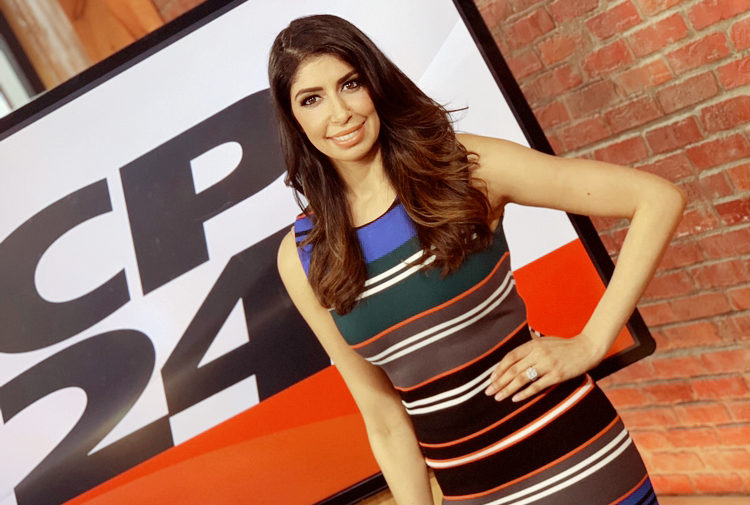 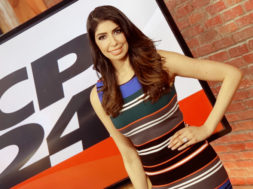 From a very young age, I had a love for performing. If I wasn’t acting out skits, or doing impressions, I was dancing or telling a joke to make people laugh. I always knew I wanted to do something where I would love going to work every day. I thought that dream was to be an actress. I went to an Arts focused high school where I majored in Dramatic Arts to pursue that dream. Upon graduation, I moved to New York City and attended the American Academy of Dramatic Arts. I was 18 years old and full of ambition but roles for women who looked like me didn’t seem to exist back then. It was the first time I realized that there were limitations to my dream and that perhaps the timing wasn’t right. I also knew that it was important for me to have a post-secondary education. I decided that my love of storytelling, combined with my performance skills made me an ideal candidate for Broadcast Journalism. I moved back to Toronto to pursue what became my passion and graduated from York University’s joint program with Seneca College with a degree in Women’s Studies and a diploma in Broadcast Journalism. I interned at several places in the lead up to graduating including at Rogers First Local and Global News. My internship at Global News turned into a paid job working behind the scenes as an Editorial Assistant. I learned so much in that role about how a newsroom worked and took on several jobs from answering phones, to becoming a teleprompter operator to working in the graphics department and writing news copy. I was a sponge, learning everything I could before I got my big break and landed the job as a Traffic and Entertainment Reporter on Global’s brand new morning show they were launching in Toronto. After 5 years on that show, I moved on to CP24, which at the time was going through a re-branding as Toronto’s Breaking News station. It was a chance to be a part of something from the ground up. I took on everything from Traffic, Weather, Reporting, Anchoring and eventually hosting CP24 Breakfast Weekend and then CP24 Breakfast weekdays. It’s been 11 years at CP24 and I love every minute of it. I never take for granted the privilege of showing up in people’s homes every morning and telling them what is happening in their city, all while putting a smile on their faces. 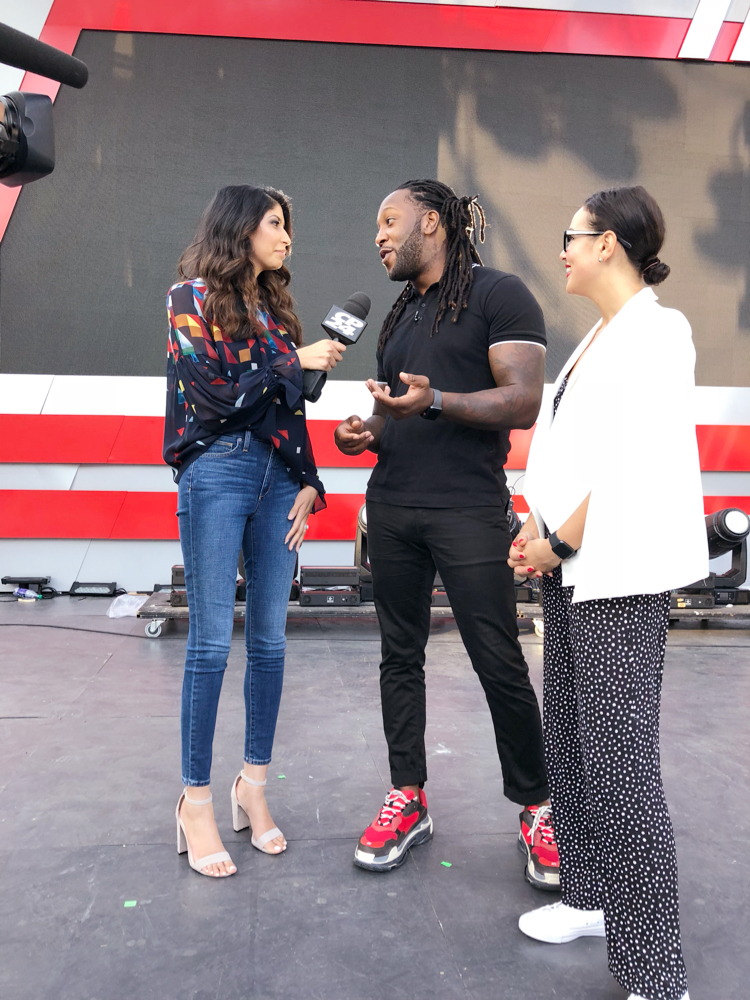 WHAT DO YOU DO ON YOUR SPARE TIME? HOW DO YOU BALANCE IT WITH YOUR PROFESSIONAL LIFE?

Working on Toronto’s number one morning show is pretty time-consuming. I wake up at 3 am every day and go non-stop until I end my day at 8 pm (yes I go to bed that early!). When I’m not on air, I’m preparing for the next day’s show. While my job is a ton of fun, it also requires a lot of research for guests I interview and pitching ideas and stories every day. Staying on top of the day’s news, what’s happening in entertainment and pop culture and trying to find stories our viewers will find interesting means there’s not a lot of down time for me. I try to eat healthy, stay active during the week and fit in family and friends on the weekend. Balance is never easy for anyone, but I have tried to make a conscious effort to put my phone down and take time for me. A few years ago, I took up meditation to try and help with turning my brain off and being present in the moment. Let’s just say work/life balance is a work in progress! 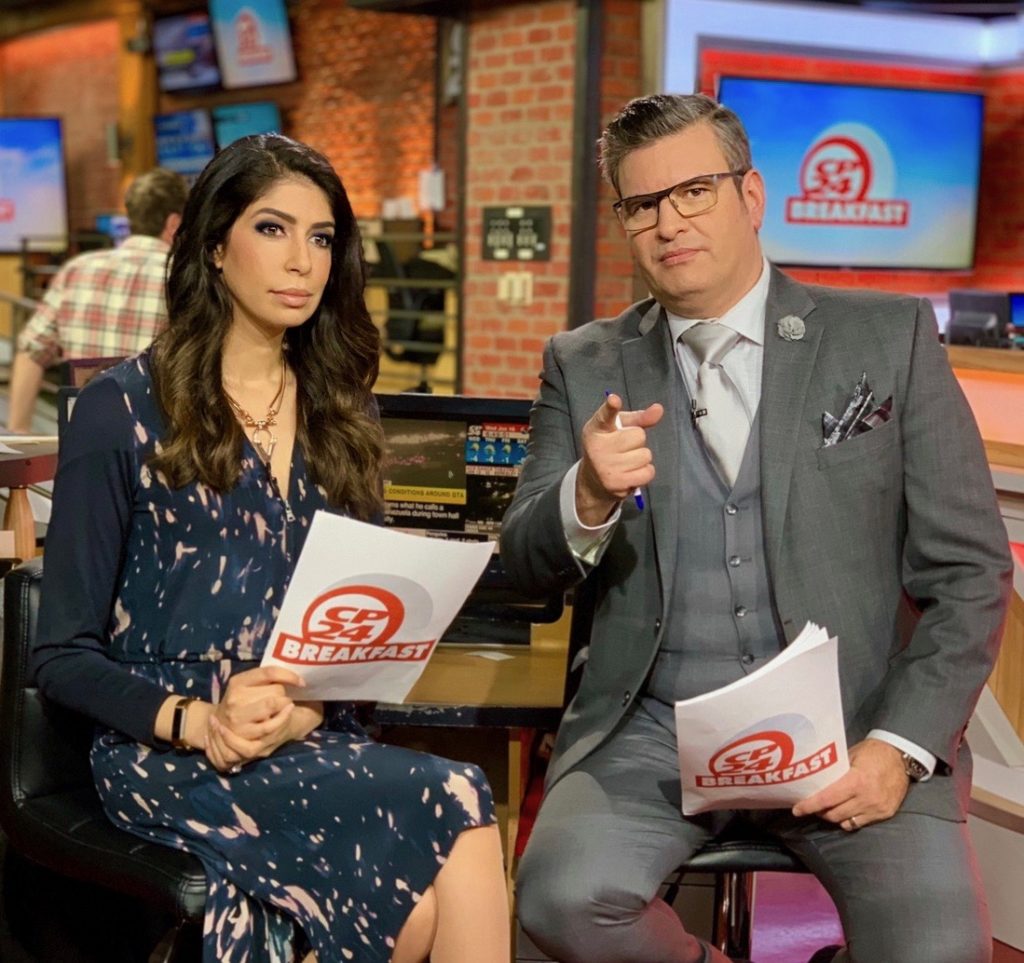 CAN YOU TALK ABOUT SOME OBSTACLES YOU FACED IN YOUR LIFE? HOW DID YOU OVERCOME THEM?

Whether it’s been personal or professional obstacles, I feel like I’ve always been underestimated. In my career, I’ve probably been told “no” much more than I’ve ever been told “yes”. That has meant trying and trying again to achieve my goals. I’ve learned that you have to show people what you can do instead of telling them what you can do. I’ve always been the type of person who has gone above and beyond to show people what I’m capable of, even if they didn’t see it initially. It’s been nearly 20 years of pushing myself and persevering but it has all been worth it. CP24 has always been a place that celebrates diversity but took it a step further by putting two South Asian hosts at the helm of their Breakfast shows. This is something I’m immensely proud of. It means that we are not seen as a talent that checks off a diversity box, but rather as professional broadcasters who, through hard work earned a seat at the table. What you see on CP24 is a true reflection of what you see in this diverse city and I get to be a part of that. I’ve also learned the importance of kindness. So many people have helped me in my journey and I have tried to pay that forward. I have had mentors and mentees along the way and at the centre of it has always been kindness and gratitude. 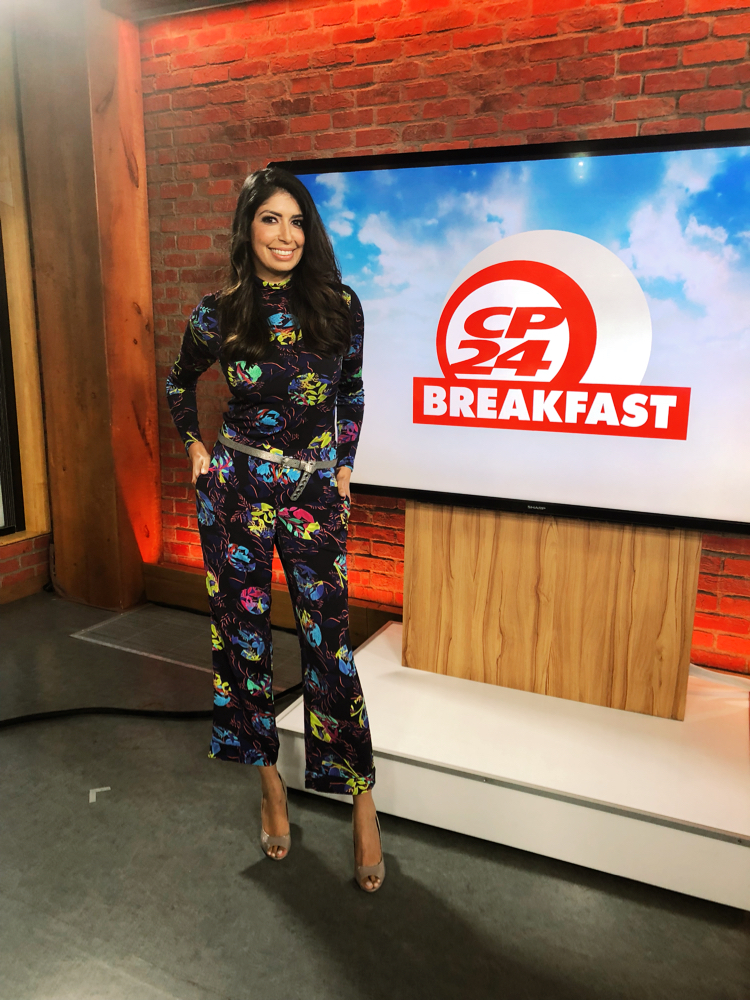 WHO ARE YOUR HEROES? WHY?

My heroes are actually everyday heroines! I’ve had the pleasure of being surrounded by so many wonderful and amazing women from my mother, to my sister to some incredible mentors in Television. I grew up watching Monika Deol on Electric Circus and realized for the first time, that I too could be on TV one day. I interned for Christine Crosbie, a former Reporter/Anchor at Global News who showed me such kindness and friendship and helped me land my first job there. I worked with Ann Rohmer at CP24 who was such a natural as a broadcaster, and so gracious, she made me strive to be just like her. I’ve spoken to countless women at charity events I’ve hosted, who in the face of adversity have triumphed and inspired so many to push through their own struggles. I’ve interviewed mothers who work 2 jobs to put food on the table for their families and still find time to give back and be positive. I look to my own mother and mother in law and what it must have been like to come to a foreign country where they knew no one and decided to put down roots and make a life for themselves even if they had no idea what tomorrow would bring. I truly believe it’s their stories and actions that make me want to be a better me and be so very grateful for the life I have. 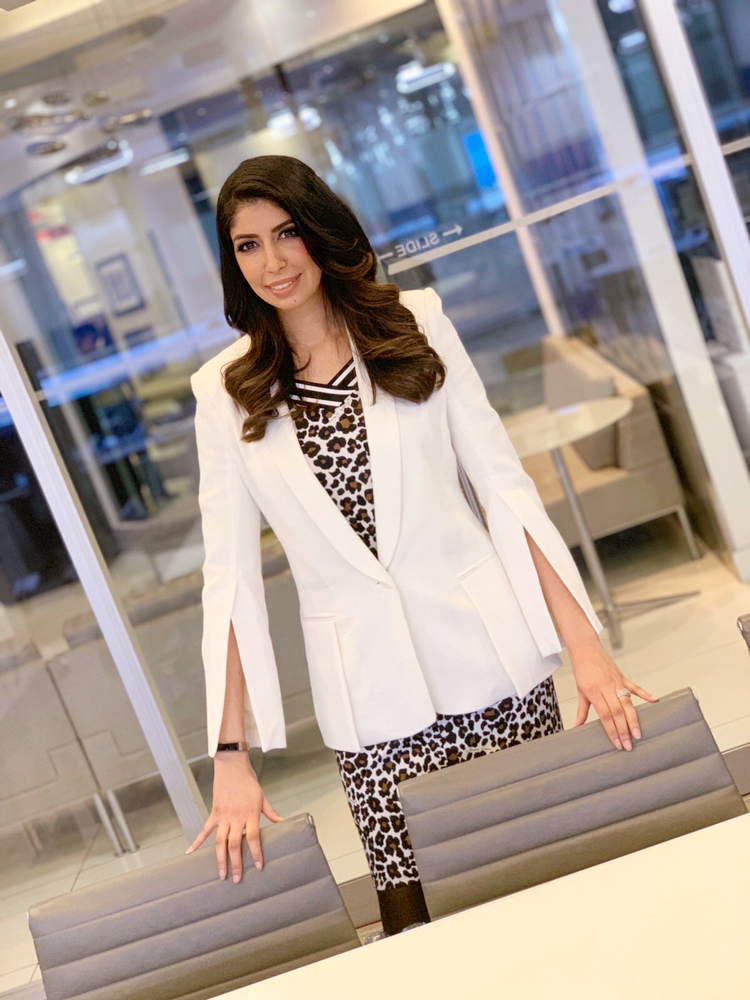 My goals are ever changing and different than when I first started working in broadcast television almost 20 years ago. What started as an opportunity to perform and tell stories has taken on different forms over the years. It used to be about telling stories and sharing information that needed to be told as a reporter, to reporting stories that took on a life of their own through the power of social media, to giving a voice to stories that perhaps 20 years ago, would never have been told. I also underestimated the impact of showing up in people’s homes every day. So many of our loyal viewers stop me on the street and tell me how I’m a part of their family as I help them start their day. My storytelling has now evolved into sharing personal stories on CP24 Breakfast. My hope for the future is my storytelling will help to create change and hopefully make a difference. 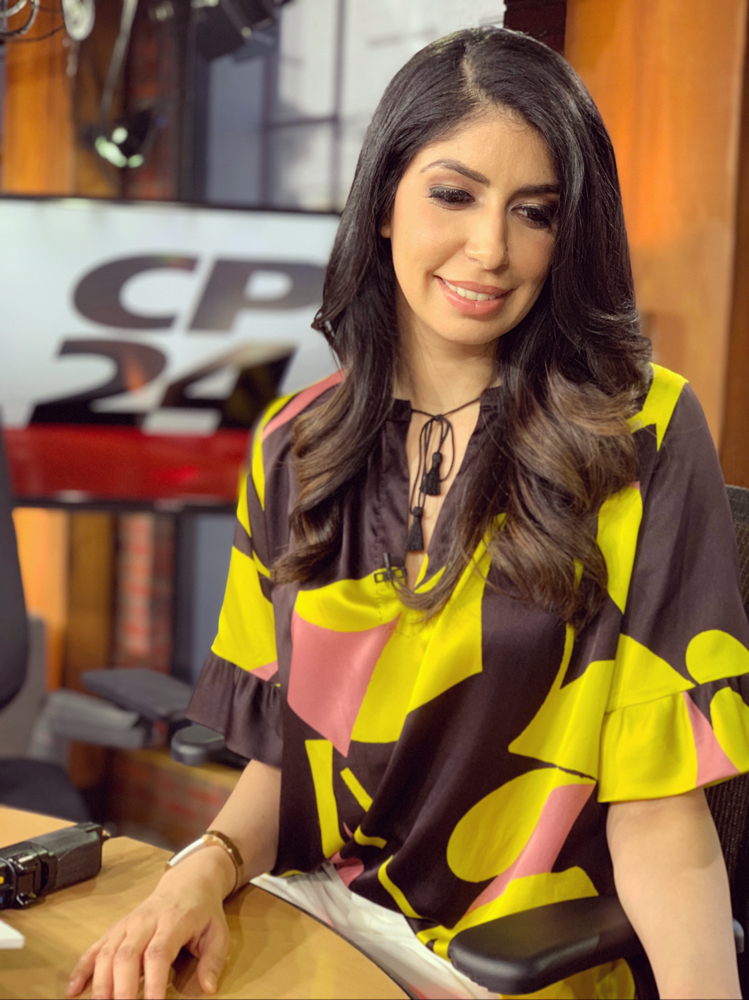 I am a firm believer in leading by example. I don’t think I’ve ever considered myself a leader per se but I’ve always wanted to help people around me and perhaps unknowingly have become one. A positive attitude and desire to uplift and motivate people can make a huge difference in how they respond to you. I always try to send a little note to either say thank you or tell someone they’re doing a great job. I know how nice it is to hear and so often people don’t take the time to do the little things that leave a lasting impact on people. There’s also so much power in making sure people are seen and heard. It’s amazing how taking time to listen can really make a difference in all your relationships. 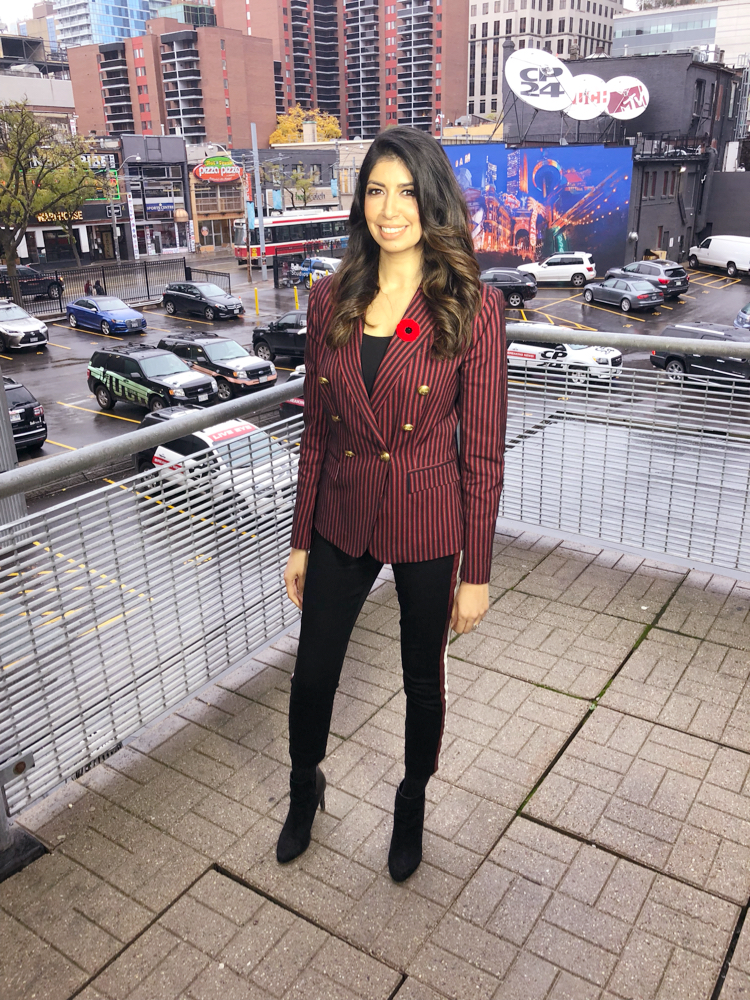 WHAT ADVICE WOULD YOU PROVIDE SOMEBODY WHO WANTS TO FOLLOW THE SAME PATH AS YOU?

My advice to anyone following in my footsteps is to remember that hard work and perseverance will always pay off. There will be times in your career where doors close and another one does not open right away. It may take a few tries knocking at that door and you will be better for it. I would recommend honing your craft so that when that opportunity does come along you are ready to show people what you are made of. If you have an attitude of gratitude you can never go wrong. 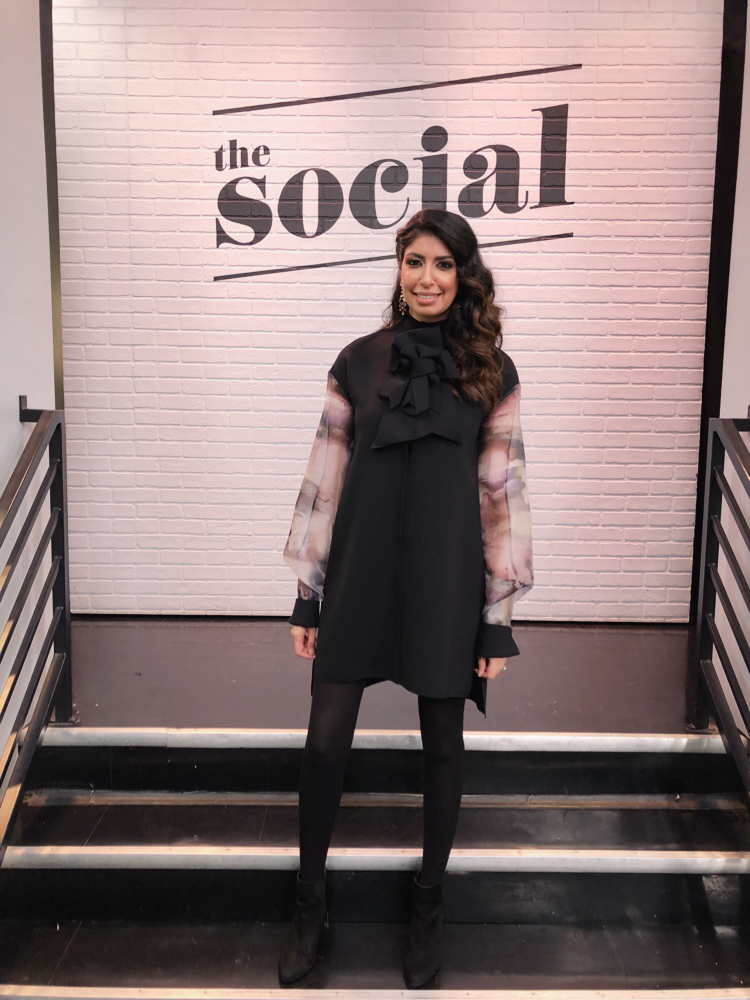