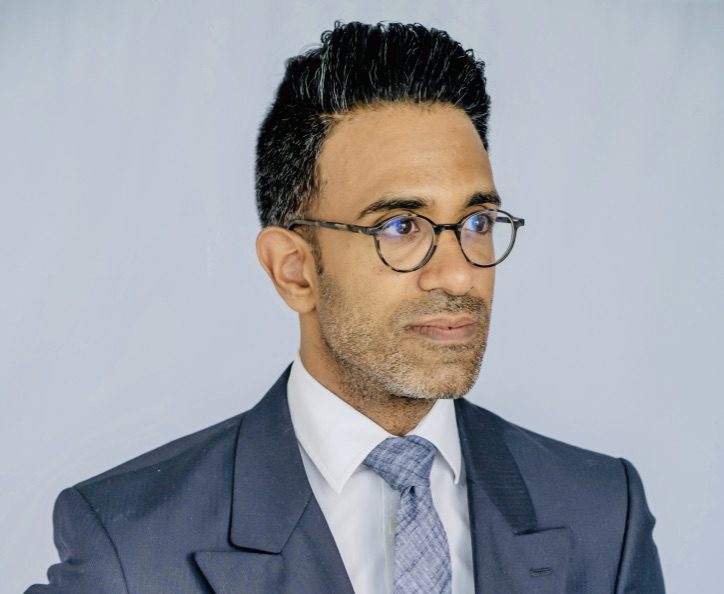 TELL US ABOUT YOURSELF AND YOUR ACCOMPLISHMENTS

My parents emigrated from India in the 70s and had me and my brother, Neil, in the 80s.  I was a huge nerd when I was younger; I collected stamps, played chess, and was an avid debater. Debating built my confidence and sparked my interest in becoming a lawyer.

After completing a commerce degree at Queen’s, I headed to Western for law school.  Following my summer and articles at Hicks Morley, a large management-side labour and employment law firm, I switched sides and became a Staff Lawyer at the African Canadian Legal Clinic, a specialty clinic of Legal Aid Ontario that fought anti-Black racism. After about two years, I made the move to the Ontario Human Rights Commission (OHRC) and broadened my human rights practice to include all grounds of discrimination under Ontario’s Human Rights Code.  I’ve been there ever since.

A few things stand out in my career.

One big highlight is when I argued in favour of hate speech legislation at the Supreme Court. Hate speech threatens the dignity and health of vulnerable groups, including Indigenous peoples, Black people, South Asians, and the LGBTQ community. Following the hearing, I was featured on The Agenda with Steve Paikin on TVO and got to go toe-toe with my former dean, who is now a judge of the Ontario Court of Appeal.

Another is when I negotiated a settlement to allow kirpans into Toronto courthouses. It was so gratifying to help advance respect for human rights for my own community.

I’m so proud to have contributed to A Collective Impact: the OHRC’s interim report on its inquiry into the racial profiling of Black people by the Toronto Police.  The report revealed that a Black person was nearly 20 times more likely than a White person to be involved in a fatal shooting by the Toronto Police.  It was cited by the Supreme Court and helped lead to the Toronto Police’s recent commitment to collect race-based data – something vulnerable communities have been demanding for decades.

This past summer, I was also named as one of Canada’s top 25 most influential lawyers by Canadian Lawyer Magazine.  The recognition is humbling and I’m glad to see human rights advocacy and issues in the spotlight. 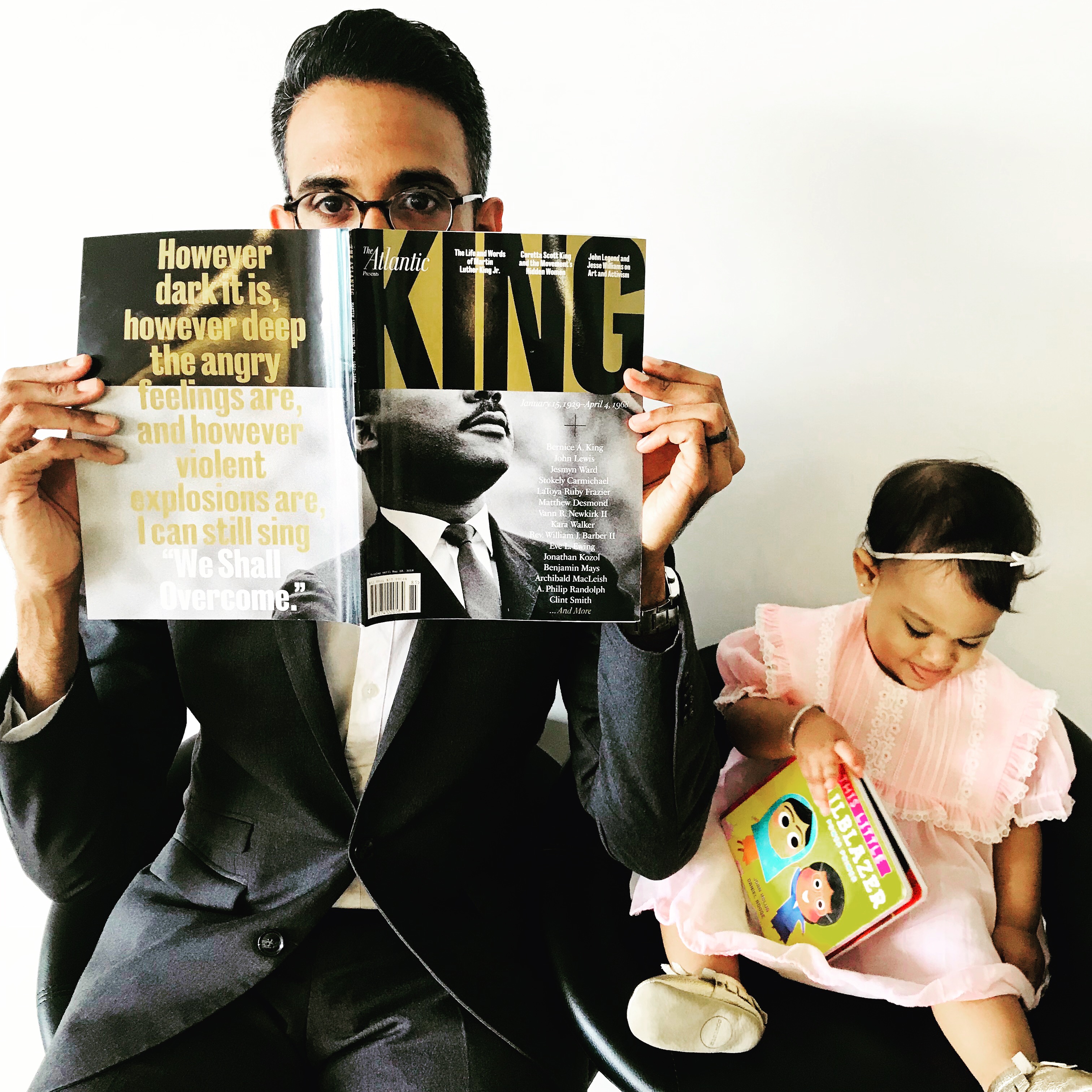 WHAT FUTURE PROJECTS CAN THE COMMUNITY EXPECT FROM YOU?

My biggest future project is our new second daughter, Samira.  I’ll be going on a four-month paternity leave in the spring and can’t wait for our trips to the library, community centre, market, and pub.  Right now, Samira is at the smiling and laughing stage and I love it.

I’m also wrapping up teaching a class on racial profiling in policing at Western University’s Faculty of Law.  I have a stellar class; the students had so many insightful comments and thoughtful questions.

Apart from that, I’ll be working on finishing up the OHRC’s inquiry into racial profiling of Black people by the Toronto Police.

WHAT DO YOU DO IN YOUR SPARE TIME? HOW DO YOU BALANCE IT WITH YOUR PROFESSIONAL LIFE?

My family is the reason I’m able to fight so hard for vulnerable and marginalized communities, live my dream and maintain some level of work-life balance.  When I’m not working, I’m hanging out with my wife, two daughters, and parents.  My parents live three floors above us in downtown Toronto.  I’m living the South Asian version of Everybody Loves Raymond and I’m Raymond.

The losses in the fight against discrimination are crushing.  Working out and fashion help relieve stress.

WHAT ARE SOME OBSTACLES YOU’VE FACED IN YOUR LIFE? HOW DID YOU OVERCOME THEM?

It was tough getting a job after articling.  I was unemployed for six months and doubted myself, but I treated my job search like a job and caught a break.  I’ve never looked back since and always make time to mentor students. 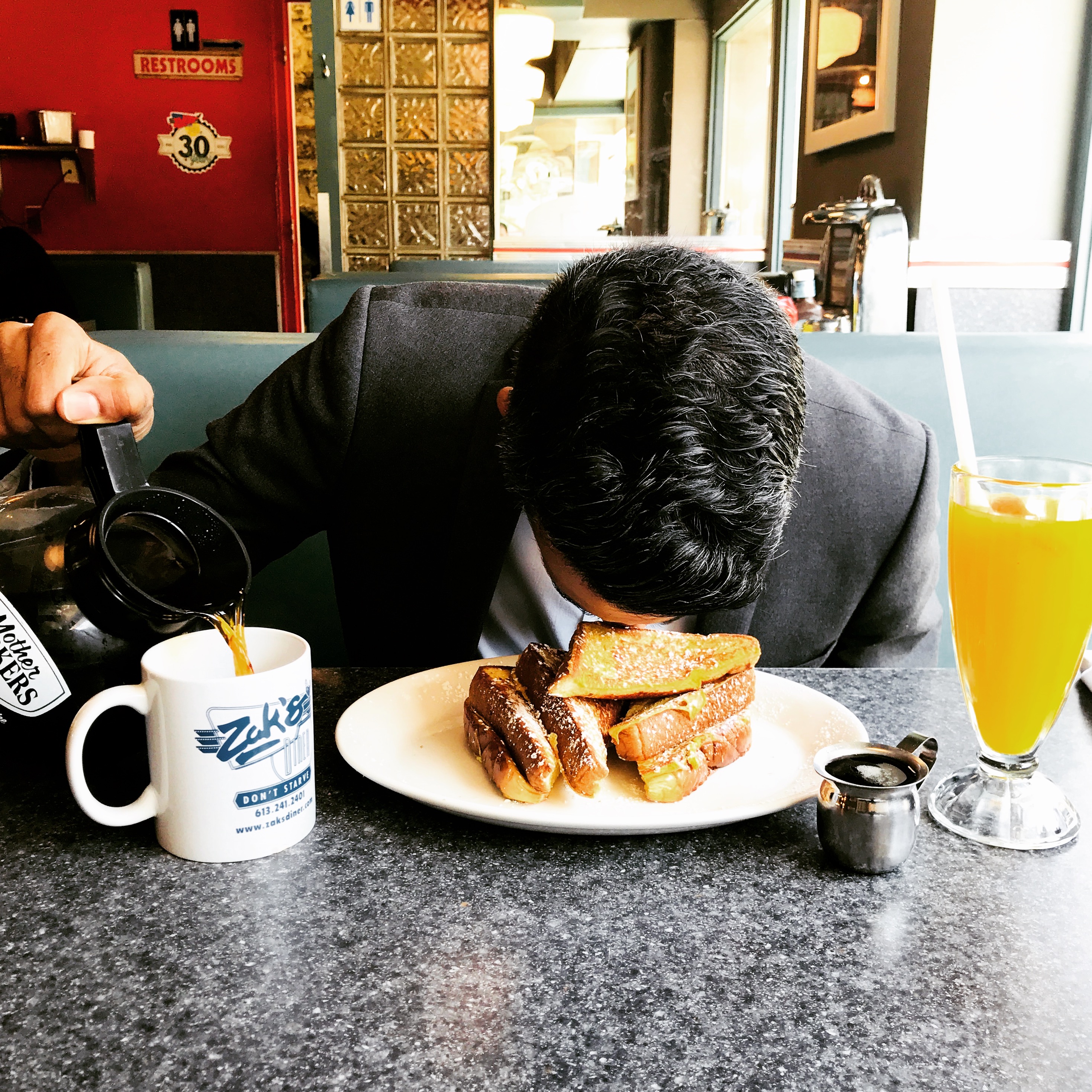 WHO ARE YOUR HEROES? WHY?

My father and father-in-law are my heroes.  I’m recognized as being influential in 2019 because they came to Canada in the 70s and persevered when they didn’t have any influence. Before leaving India, my dad would travel hundreds of miles across India on the bus with rolls of fabric. In northern British Columbia, my wife’s dad was chased by racists with baseball bats.  I’m standing on their shoulders.

My ultimate goal is to do right by vulnerable and marginalized communities and to leave this world in a better place than when I found it. My work and how I raise my daughters is how I’m going to meet it. 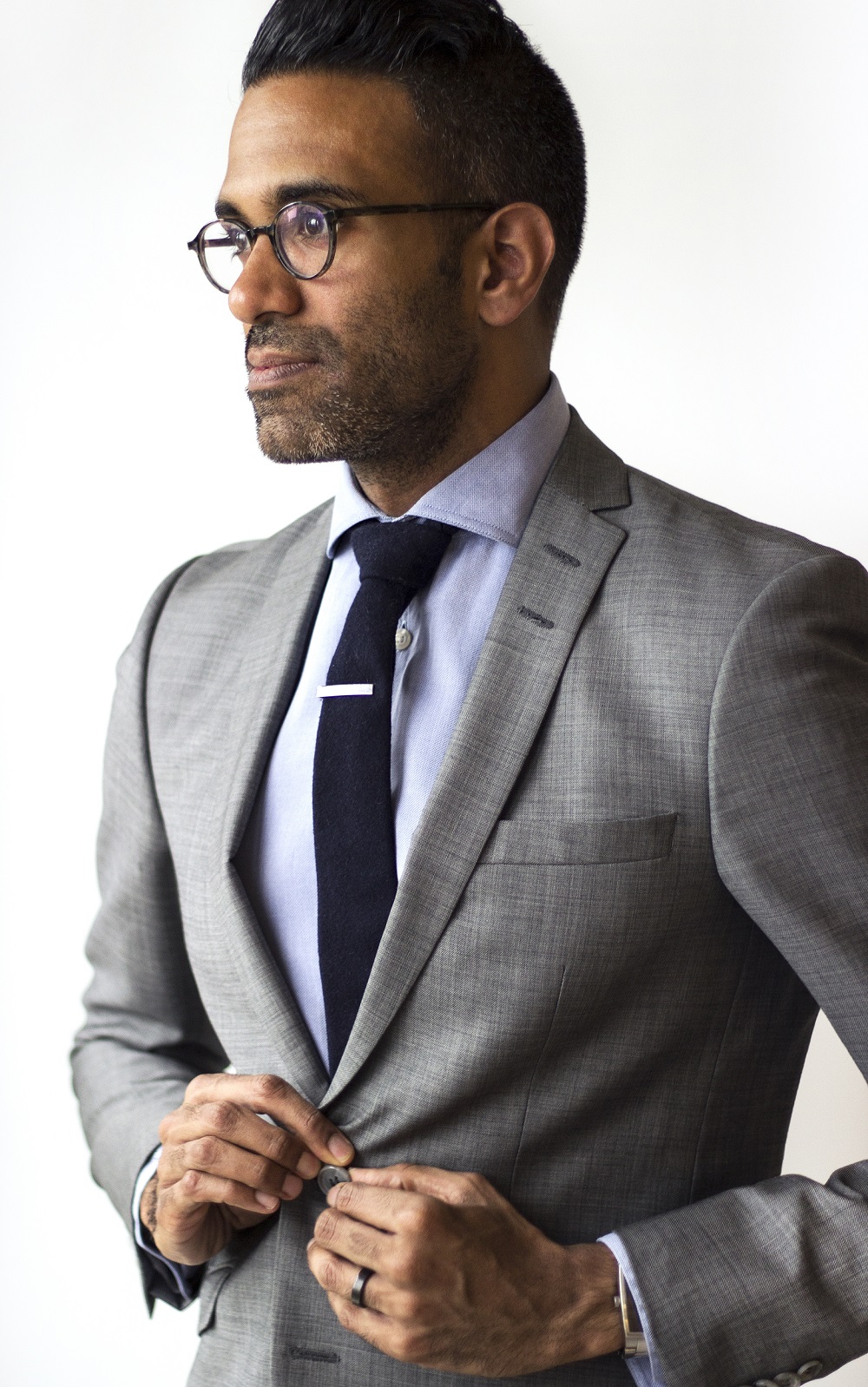 Leadership, like being an effective lawyer, means listening and applying soft power – leading by example, identifying shared interests, and attracting and persuading others rather than coercing them.

Effective leadership takes time.  It’s something I will be working towards and refining my whole life. 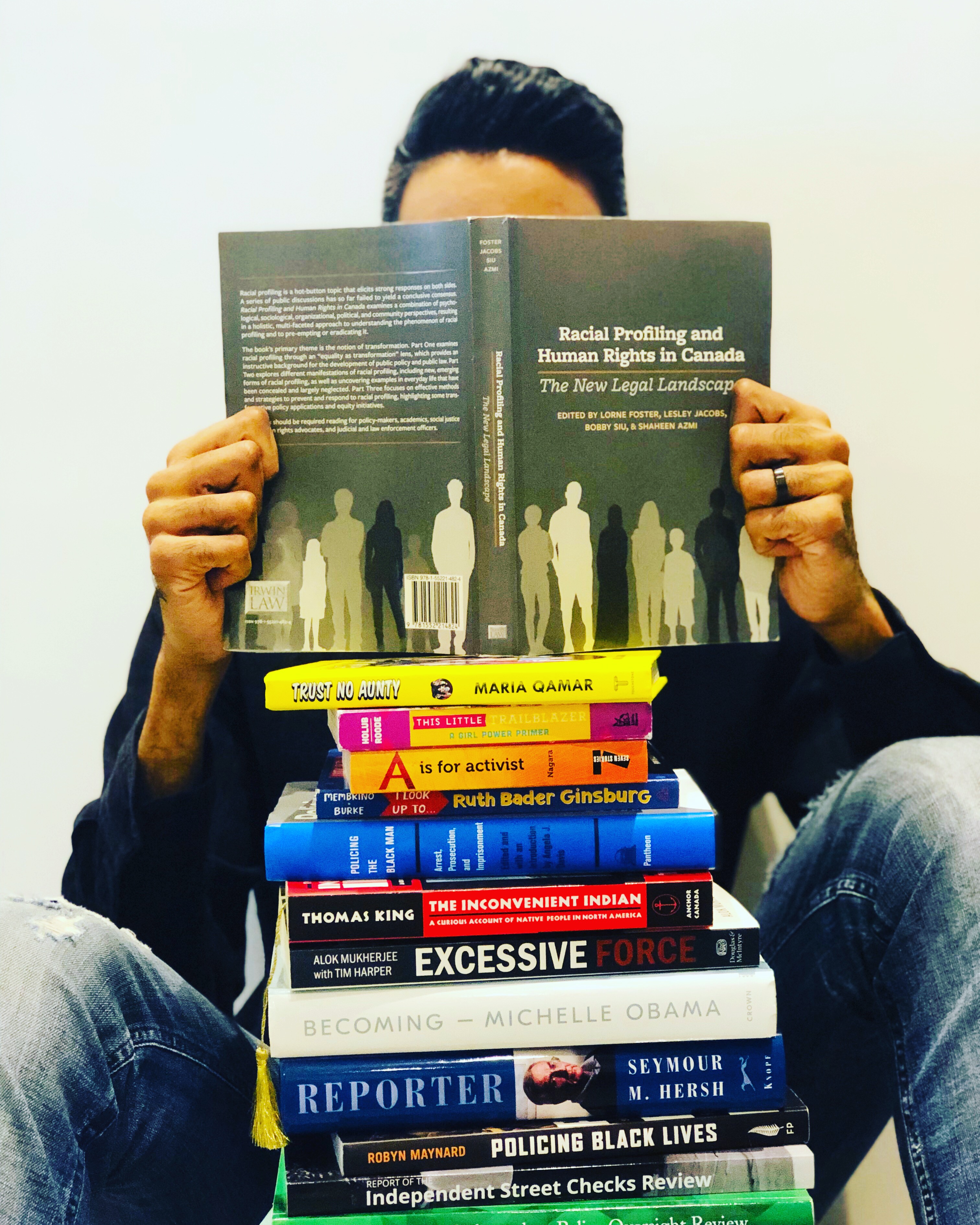 WHAT ADVICE WOULD YOU GIVE SOMEBODY WHO WANTS TO FOLLOW YOUR PATH?

Be ambitious.  Find opportunities to fight for human rights.  Listen to lived experiences.  Find a mentor.  Pay it forward.

THREE TRUTHS AND A LIE

I’ve been skydiving, have two tattoos, almost became an accountant, and moonlight as a chef.

Good luck!  Find me on Instagram and I’ll tell you the lie.